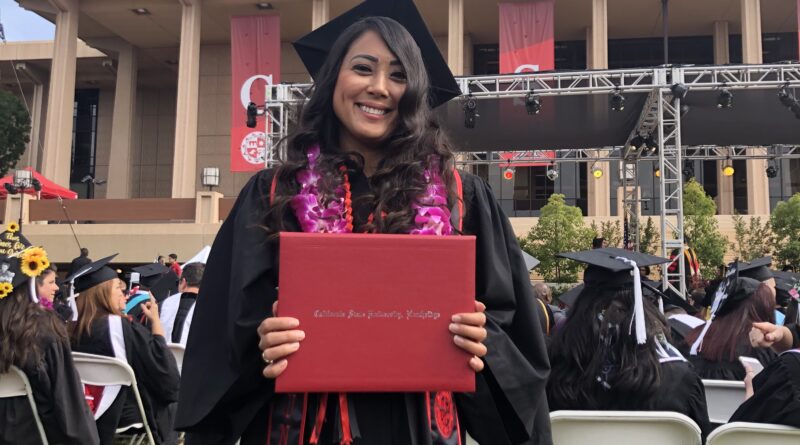 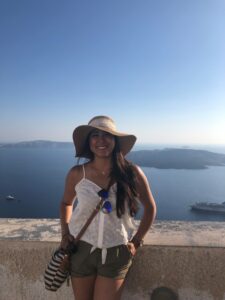 My hands being cuffed, my rights being read…. this was the end, and also this was my new beginning.

Growing up life was pretty normal with my mom and dad, older sister, and a house in the suburbs.

I went to Catholic school, participated in cheerleading and the whole nine yards. My parents were strict and had me very much “at home” when I wasn’t in school or school activities.

I never really got to go anywhere with my friends. I was always curious but remained obedient to my parent’s wishes.

You would think I had it made but small disruptions began with my parents divorcing, my father taking off and leaving my mom with debt and bills. I was not able to identify it then, but it was the start of rebellion.

Next thing you know, we had moved away and my mom started working 2 jobs. My older sister also moved away and I suddenly found myself alone for the most part.

With my mother not being as present now and extremely tired of telling me I couldn’t go here or there, I started to test the limits, allowing curiosity to get its way. Did I mention it was the start of rebellion?

I would, sooner than later, begin to find myself in risky and dangerous situations.

I was sneaking out at night, hanging out with the wrong crowd and finding myself in relationships that were toxic. But “hey!” what did I know, I was young, still going to school and even had a part time job, so I thought I was like any other typical child.

Soon, again, I would find myself dating the high school drug dealer. He was the 4.0 student during the day and at night he was the bad boy. 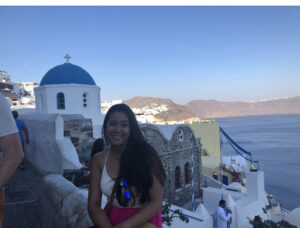 Everyone wanted to be in my shoes it seemed. I was the girl who was dating the boy who had access to all the drugs. I was a teenager, feeling invincible.

I worked hard, partied harder (party = weed, alcohol, cocaine, pills, ecstasy) and went to school, so in my eyes I was living the life…my best life, or so I thought.

All childhood friends partied. We lived in a part of town where our parents were clueless to the world of drugs and drinking, so nobody ever told us differently. From our perspective, it was absolutely normal.

I even went to college, studying to be a nurse. I was in complete denial once I started ditching and failing class that I had a “problem”.

The cocaine, drinking, pill popping, and ecstasy was becoming an every other day routine.

I even crashed my car from being under the influence. I played it off so well that the paramedics and police just let me go.

It wasn’t until I turned 21 that I was introduced to two substances that would bring me my knees.

Those two substances were heroin and crack…and they forever changed my life.

As we all know the disease of addiction is cunning and baffling.

What started off innocently took me to a world beyond my existence. The little white lies I would tell and use to get more money took on a larger scale of self-deception, manipulation and dishonesty, which included robbing, stealing, betrayal, and the stripping of my own dignity and self-respect.

I became everything I swore I would never be: the liar, the seducer, the backstabber, the thief, and whatever other horrible name you can think of in the Webster dictionary.

Multiple times my family and friends intervened, sending me to detox and rehab. But it was a joke to me. 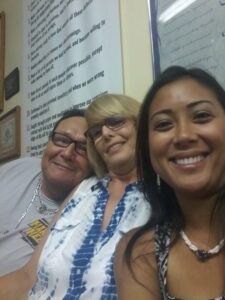 I never thought I had an actual problem. In my eyes, I was good, I wasn’t homeless, I didn’t have mental health issues, I had no problems with the law, I didn’t grow up in a “bad neighborhood”, I wasn’t poor and I had my family.

Don’t get me wrong, I had the intention of somewhat wanting to change, but it was never strong enough to keep me to my word once I walked out the door of treatment.

Suddenly, as my disease of addiction progressed, everything I once said I would never be turned out to be a lie…in fact, I had become just that.

Needless to say, drugs took me to the lowest point in my life. I was running around the streets, living in the streets, hanging out with dealers, pimps, prostitutes and gang members, to say the least.

Every good friend and family member I had slowly disappeared. I surrounded myself with addicts that did whatever was necessary to come up on their next fix, hit or high.

It wasn’t too long till I encountered the law. My first arrest led me to find out that I was pregnant with my first child.

I swore to the heavens that this was my reality check that I was going to stay clean.

It was soon after having my daughter that the father of my child returned from prison and I fell into the darkness of heroin once again.

This time, I made a deal and told myself that I would only use to get well. I pretended that I was fine, thought I had everyone convinced.

I would eventually find out, once again, that I was only fooling myself.

Deeper Into The Darkness 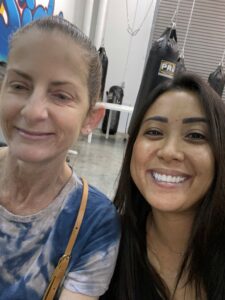 For the next few years, I continued to use. I ended up getting pregnant again and thought that this would be the last of my using days.

That lasted for a few weeks and once again, like clockwork, I relapsed again.

My heroin addiction was now out of control and I had this great idea that methadone would somehow fix that.

I actually thought I could wean myself off the heroin using methadone.

And that might have worked…if I had actually stopped using the heroin.

Now I am using heroin and methadone instead of the methadone replacing the heroin.

The Rude Awakening & The Blessing

By now, with the killer combination of using heroin with methadone, my husband was heavily using and finding more ways to “get well” by any means necessary and at all cost.

From robbing drug dealers to robbing stores and any other thing that wasn’t bolted down, he wanted to make sure he was able to support and maintain our seriously, out of control habits.

Then on the night of Nov 30, 2009, was my blessing in disguise. It was the day of my arrest and also my clean date.

My husband (who is now my ex) and I committed a crime that changed our whole world overnight.

This leads me to the beginning of my story:

We were arrested for armed robbery, highway pursuit & felony evading. This night ended with a police pit maneuver on us with our children in the back seat.

We were taken away by the police, booked into county jail and stayed in jail until our sentencing was passed down. 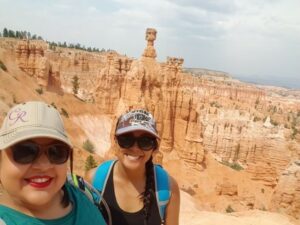 Although it did not seem like a blessing or divine intervention at the time, I realize today that it most certainly was.

I was sentenced to 6 years, 4 months to state prison with California Department of Corrections.

Prior to this, I had only spent a total of 7 days in jail since my first arrest in 2003. Now, I was looking at over half a decade of my life.

This was a rude awakening, but at the same time it was a blessing because my higher power was able to get my undivided attention. I served 5 years, 6 months of that sentence with CDC.

I spent 15 months in Lynnwood Womens Facility and 6 months in California Institution for Women (CIW-Chino). The rest of my term was spent in Fire Camp for good behavior, which was another unseen blessing.

Will The Real Nadia Please Stand Up!

Needless to say, I could have become a product of my environment but I rose to the occasion. I took this time to reassess my life and, with the help from God, remodel my soul.

Nothing was easy for me when I got out, I must admit.

Much can happen in a month but in 5 years, 6months, the whole world damn near changed in my eyes.

I had to right all my wrongs, I had to win back the love, trust and respect of my children, family, and friends. That would prove to be the hardest challenge I would face.

No matter how much I tried to do right, it was still never enough. But it was ok…I had to keep pushing because I caused a lot of hurt and damage. I realized only time and devotion was going to heal these wounds that I had placed on my loved ones.

I humbled myself though. I even found a job that only paid $9 an hour. It was humbling to say the least but I was, and still am, grateful for that experience. I learned that $9 HONEST dollars is priceless! and $9 beats $0

I went back to school, went to the rooms of recovery, found a sponsor, worked the steps, and found new ways to live life clean and sober and on life’s terms.

My parole officer asked me to mentor troubled youth for a program in the city where I reside. 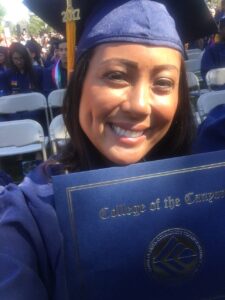 After years passed, I graduated from College of the Canyons with my AA degree.

My parole officer was taken back by the amount of dedication and hard work I put into my life when I came home, that she showed up to my graduation and handed my discharge paperwork from the state.

Giving my California Department of Corrections prison number back was just as equivalent as receiving my AA degree.

I was hungry for more, so I applied to Tarzana Treatment Center and went from a technician to a counselor while simultaneously working towards and receiving my BA at California State University of Northridge (CSUN).

I began to travel and found the beauty of nature. I started traveling domestic and soon found myself traveling internationally.

Today I can say I am a passionate person who loves living life. I have traded in my sorrow and pain for hope 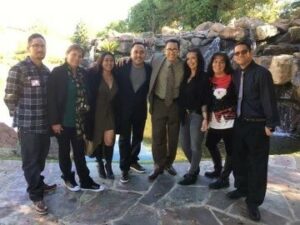 Today, I am privileged to be a mother, a daughter and I am also someone who other people can call a “friend” today.

The difference today is that I decided to hold on, to stay strong and to persevere at all costs, because you see, happiness comes at a price…just like misery does.

The question I had to ask myself is, “what are you willing to pay today?”

Today, I am currently working towards a Masters degree in Social Work, where I am proud to say that I will be receiving my degree in May of 2022.

I plan on taking my degree and becoming a licensed clinical social worker (LCSW).

I want to give back what was freely given to me.

My higher power had a plan for me even when I couldn’t see it.

I was given the chance to live through my trials and tribulations so I can share it with others.

It was my destiny to show the light for those still left in the dark…this my journey, this is my story…

…my name is Nadia…and I am grateful recovering addict…… 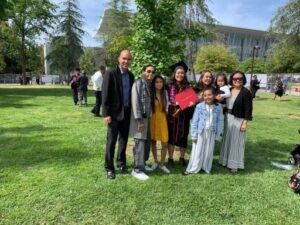 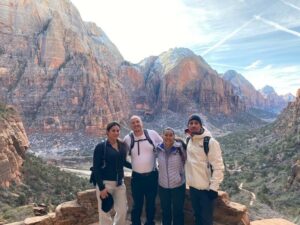 The following two quotes I hold close to heart, because they speak to me. My hope is that they do the same for you!

“Not until we are lost do we begin to understand ourselves” – Henry David Thoreau.