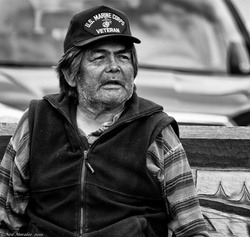 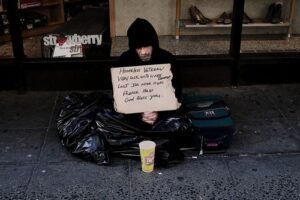 From War To Addiction – Helping Our Vets Get Back

Although the question of how to help homeless vets who have come home from war, only to now suffer from PTSD, depression and eventually addiction to boot, has been an ongoing “unanswered” dilemma in this country. As well, although homelessness affects many people from many walks of life and circumstances, there seems to be a pattern, or reference point, for many combat veteran’s who after making it home from the war have succumbed to circumstances that have only allowed them to continue fighting the war (long after it is over) in their mind.

Many of our combat veteran’s who suffer from PTSD have found themselves not only homeless in the greatest country in the world, but have found themselves discarded and disregarded similarly by our government as last night’s leftovers thrown in the trash. In the process, many have resorted and resulted to drugs and alcohol to calm the spiritual storm that war wages and weighs heavily upon.

Today we will be looking at two words that should never be seen together: HOMELESS and VETERAN would be those two words. In many cases of homeless veteran’s, we see many veteran’s go from war straight to addiction, eventually becoming homeless rather by choice or circumstances. We need to be a part of the journey from war to addiction and, then, seeing addiction making it’s way back home, and home in this instance is in the mind. Because the mind is terrible place to be when you are in bondage, but it’s a beautiful place to be when you are free.

Sad to say, many of our veterans are NOT free, and we owe them a journey to freedom, just as the freedom they fought for you and me. Many who fought for our freedom have already succumbed to the wilds of addiction and depression, being alone, even after making it home from combat. For many it proves to be a ‘unbearable’ place to live.

First, let’s break this down. What is the definition of “homeless”? According to the National Coalition of Homeless Veterans, The United States Code contains the official federal definition of homelessness, which is commonly used because it controls federal funding streams. In Title 42, Chapter 119, Subchapter 1, “homeless” is defined as what follows precisely (Dunne, Eugene, et al.): “homeless” or “homeless individual or homeless person” includes an individual who lacks a fixed, regular, and adequate nighttime residence; and an individual who has a primary nighttime residence that is:

Second, what is the definition of “veteran”? The Code of Federal Regulations, published in 2020, defines a veteran as “a person who served in the active military, naval, or air service and who was discharged or released under conditions other than dishonorable.” This definition explains that any individual that completed a service for any branch of the United States of America’s Armed Forces classifies as a veteran if they were not dishonorably discharged. In general, most organizations use U.S. Department of Veterans Affairs eligibility criteria to determine which veteran’s can access services. Eligibility for VA benefits is, once again, “based upon discharge from active military service under other than dishonorable conditions” (Code of Federal Regulations: Traverse City Record Eagle). Benefits vary according to factors connected with the type and length of military service.

Over 120, 000 of the United States of America’s Military Veterans are homeless today and at any given time. The same homeless veteran’s that I speak of have served in World War II, the Korean War, Cold War, Vietnam War, Grenada, Panama, Lebanon and Persian Gulf War. Nearly half of homeless veteran’s served in Vietnam, two-thirds served our country for at least three years and one-third of that have been stationed in a war zone. It is important to know, says veteran activist and journalist Stephan Metraux:

“another 1.4 million veterans will be considered at risk of homelessness due to poverty, lack of social network support, and foul living conditions in overcrowded or substandard housing, as the National Coalition for Homeless Veterans concurs with this report. This is unacceptable for any individual who has fought for the freedom, democracies, liberty and pursuit of happiness of all individual citizens of the United States. Not just the ones who died fighting. But for the ones who survived and have been forgotten and left to fight another battle alone……and that alone is the battle that lives in their head after coming home from war. But each of us tends to look toward our U.S. Government for their relief. And with good measure. But it’s a job for everyone. Any citizen of this count, It’s your job too.” 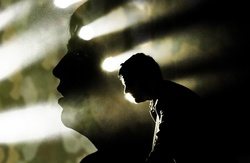 Today we will expose this tragic military fate and injustice, what’s been ignored by not only our own government, but by individual citizens, and review some possible solutions. Let’s look at some stats of the problem first. Here are some demographics of homeless veteran’s in the U.S.:

The U.S. Department of Veterans Affairs states that the nation’s homeless veterans are predominantly male. The majority are single; live in urban areas; and suffer from mental illness, alcohol and/or substance abuse, or co-occurring disorders. Over 22% of all the U.S. adult homeless population are combat veteran’s. Roughly 47% of all homeless combat veterans are African American or Hispanic, despite only accounting for 11.4% and 3.9% of the U.S. veteran population, respectively.

In addition to the complex set of factors influencing all homelessness, which are extreme shortage of affordable housing, livable income and access to health care, many displaced and at-risk veteran’s live with lingering effects of post-traumatic stress disorder (PTSD) and substance abuse, which are compounded by a lack of government, family and social support networks.

What Is The Solution? – Can We At Least Recognize The Problem?

The U.S. must give a top priority for homeless veteran’s when it comes to secure, safe, clean housing that offers a supportive environment free of drugs and alcohol. A high percentage of veterans are caught in the grip of addiction/alcoholism because it is an escape from the nightmare that they repeatedly live. Safe housing is essential to combat alternative street solutions, such as crime, drugs and suicide or homicide.

Veteran Needs Met – What do our veteran’s need?

Veteran Programs That Are Effective – What seems to work best?

Community Outreach Participation from Civilians – What can I do? 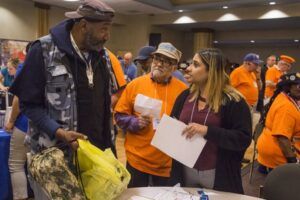 Veterans are 50% more likely to become homeless than other Americans due to poverty, lack of support networks, and dismal living conditions in overcrowded or substandard housing. The problem of homelessness among veterans is huge because even though the Veteran Administration (VA) served more than 92,000 homeless veteran’s in 2014, an estimated 500,000 veterans are homeless at some time during the year. The VA reaches 20% of those in need, which leaves roughly 400,000 veteran’s without supportive services (Vietnam Veterans).

Review: About 1.4 million veterans are considered at-risk of homelessness (American Journal of Public Health). We remember that “at risk” is defined as being below the poverty level as well as paying more than 50% of individual income on rent. It also includes households with a member who has a disability, a person living alone, and those who are not in the labor force. Research shows that the greatest risk factors for homelessness are lack of support and social isolation after discharge. Veterans have low marriage rates and high divorce rates; and, currently, 1 in 5 veterans is living alone. Social networks are particularly important for those who have a crisis or need temporary help. Without this assistance, they are at high risk for homelessness.

Nearly half a million veterans are severely rent burdened and paying more than 50% of their income for rent (American Journal of Public Health). More 55% of veteran’s with severe housing cost burden fell below the poverty level and 43% receive food stamps. Approximately 47% of the 1.7 million veterans from Iraq and Afghanistan are seeking disability compensation (Get Better at Counting Homeless Veterans). The average wait to get a disability claim processed and approved is any where from 8 months to 2 years.

Although homelessness affects many people from many walks of life and circumstances, there seems to be a pattern or reference point for many combat veteran’s. Sad to say that the reference point is the battlefield that we, as Americans, have left them on…. alone. So, the question is “knowing what you know now, what are you going to do?” What will you do to protect the veteran’s that fought for the very freedom and liberty that you, the American citizen or resident, are recipients of today?

Ladies and gentlemen, it is time for us to stop looking at the government, the non-profit organization, the Democrats, the Republicans, the conservative, the liberal or whatever else you may call yourself. It’s time to answer the call to preserve the quality of life our homeless veterans are living……we need to suit up and get on the battlefield for them just as they did for us. The point is not to try to save everyone; it’s impossible. But if we each do our part, as our veteran’s did for us, we can turn impossible into possibilities. Each one of us can teach one of us. This is the goal. In addiction period. Homelessness is just another consolation prize of addiction.

The last thing I want to say is please do not misunderstand what I am saying about addiction, homelessness and veteran’s. Just because it is a veteran doesn’t excuse the addiction. I am not saying that veteran’s have a free pass to get high because they fought for our country. What I am saying is that many veteran’s situation, as you have read above in the statistics, have common reference points, one being PTSD from combat or service in general. Many veteran’s prior to service had no affiliation with drugs or alcohol.

Once again, I am not saying that this is excused based on the individual being a veteran. However, a veteran that has served, fought, lost a limb, killed enemies and has been taken out of that hostile environment and brought back home with no debriefing, closure or relief is a far cry different from Johnny who would just rather get high with his knucklehead friends, ditch school, live off mom and dad and run them into the ground and then wake up one day and realize he has burned all of his bridges. You get my point, and for those of you who don’t, maybe you will get it on the way home. 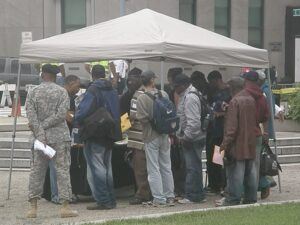 I would like to thank the following people and their work that I was able to cite in putting together my research and, hopefully, persuasive message to encourage ALL of us to support our troops, and to support them not only in OUR time of need, but in their time of need as well. Many veterans are still fighting the battle years after the war is over. Many will, as we speak, just be beginning their battle as well. Let us keep this at our forefront. They deserve our best.