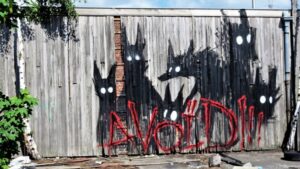 The topic on how to deal with the fear of failure could be applied to almost any area of anybody’s life, at one time or another.

There is actually a thin line between both, just as love and hate (so they say).

The meaning being, sometimes you just can’t tell the difference between the two.

If someone is struggling with a stronghold, one of two things will surely characteristically play out.

One is that the individual who is struggling will simply deny, or ignore, that there is a problem. We call this denial.

Second and most common, believe it or not, is that the fear of overcoming the stronghold will leave us in a state of paralysis.

In other words, we stay stuck in our position because the hope of success is overshadowed by the fear of our failure.

So, we do nothing and begin to conjure up excuses of why, eventually we start to hide.

The Strategy of Avoidance in Addiction

Have you ever felt like you were capable of being successful but were gripped with the fear of actually succeeding?

If you answered “no”, then come back when you are ready to be honest about it and with yourself more importantly.

Now, if you answered “yes” to this we are ready to move on, because the truth is that we have ALL felt like this about something in our lives, at one time or another.

It is only human to doubt, especially yourself and especially at a time when you are gripped with fear.

Ultimately, fear causes us to avoid situations or circumstances rather than confront or face them head on.

Avoidance is a familiar strategy for those of us who really want to recover from our addiction.

We now know that staying high or loaded and drunk all the time was often a way to avoid facing our problems and all the memories that still cause us pain.

Over a period of time, eventually, our avoidance became one of the most prized tools that we utilized.

Denial is different because we pretend that we don’t have any particular issues that need to be dealt with to begin with.

Avoidance sees those issues but sets them aside and pretends that we will address them later.

You could, in this example, equate avoidance to procrastination.

We procrastinate, saying, “I’ll do it, but later, OK?”

The truth is we have no plans of dealing with them any time soon, if ever.

Avoidance is part of our defective thinking: if we don’t deal with our issues, maybe they will magically go away!

But we know, intuitively, that they will not.

It is procrastination that keeps it a possibility and that becomes good enough for us…” I’ll buy that lie for a dollar!” becomes our stance.

The only possible way to resolve them is to confront them. It’s that simple.

The difference between a warrior and a coward is courage.

If a warrior suddenly lacked the courage to fight, he would cower in the face of that fight.

So, if a coward musters up the courage to face a situation (even though he is scared) he becomes courageous within the face of that fear he has chosen to face.

It may be months, years or even decades since these issues started.

Today, lucky for us, is a different day. Today is a day of resolve if that’s how we see it.

Today, tell yourself, “I am going to face what has been holding me hostage now for some time!”

Courage is fundamental to our being.

Fear is defective behavior and practiced.

I once heard that we were not created with “a spirit of fear, but of power, love and a sound mind!”

The problem with this is that we, as individuals, are involved within the process of actually believing this.

Do we believe we were created with the power, love and sound mind to overcome the fear which has controlled our lives? the fear of the unknown? the fear of failure? the fear of just not being OK for today?

I don’t know about you, but I lived in this gripping fear for decades.

But today (somebody say TODAY!), today is a day of activation, motivation and confirmation.

With these 3 ingredients we are going to focus on the issues, present the footwork in confronting them and stay out of the results.

Universal Assistance Will Always Accompany Us

If we do this, the Universe will assist us in accomplishing the task at hand.

It is no different from committing a crime. Here’s an example:

If you, let’s say, have a habit of driving drunk you are taking a risk on a probability of being pulled over by the law.

Now, if this happens, you are subject to DUI, which is a crime in most states.

Multiple DUI’s eventually will turn from misdemeanors to, now, a combined felony charge.

If you never addressed this, then the Universe had a way of inviting the police in to pull your ass over and distribute the justice for the deed.

The Universe had a way of assisting our arrest and having us jailed for our crime.

In this way as well, the Universe will step in to assist your journey of resolution so you can become free.

Unlike the handcuffs of the police, but this was the road you were traveling, so the Universe stepped in to assist.

I believe right or wrong actions are both rewarded by the Universe.

As we learn to work on ourselves in recovery, we ask God in prayer and meditation to grant us the courage to face the issues we’ve been avoiding.

I believe in doing so, God gives His Universe marching orders for directing our lives in a, now, correct and meaningful life.

Failure Is Part of a Successful Journey

I would like to convey this simple truth for all of us. There is no success in ANYTHING without failure.

No one said it better than Thomas Edison, saying, “I have NOT failed… I just found 10,000 ways that will not work!”

If Thomas Edison had given up in the fear of failure all those times, we might not know of electric power generation, mass communication, sound recordings or motion pictures today as we do.

Many of us have been in and out of numerous drug and alcohol treatment facilities.

Some of us have been in many institutional settings, such as jail and prison or even mental hospitals.

There are many of us who have worked very hard at our sobriety, only to relapse just the same.

This is a very scary position to be in because our reality becomes surreal…relapse and can’t stay clean become reality.

And, sadly, there are too many of us who have succumbed to the disease of addiction and are no longer here.

Sometimes the struggle to get clean is too much and it appears easier to stay dirty.

But the truth is, nothing in life worth doing is easy and nothing is accomplished while living in the fear of failure.

So today choose to not rest in the fear of failure, knowing that failure is a part of the journey and is nothing to fear.

Failure is the ingredient we will use, if necessary, to get that much closer to succeeding because relapse and sobriety are not far from each other.

We will no longer let the fear of failure overcome our hope for success in our recovery.

We cannot possibly succeed if we are afraid to and do absolutely nothing about it.

We can, however, be afraid and courageously face our fears with the hope of something better on the other side.

Remember that being afraid isn’t what makes a coward.

It’s being afraid and moving forward with courage that separates the coward from the courageous.

Choose to be courageous for your life today, even if you are scared about it.

If you have questions or concerns with recovering or your current sobriety, please reach out to us: info@timotherapy.com

We look forward to hearing from you. Please feel free also to leave comments or suggestions below for the community.

What you have to say also may be the very word needed to change someone’s life.

18 thoughts on “How To Deal With The Fear Of Failure”